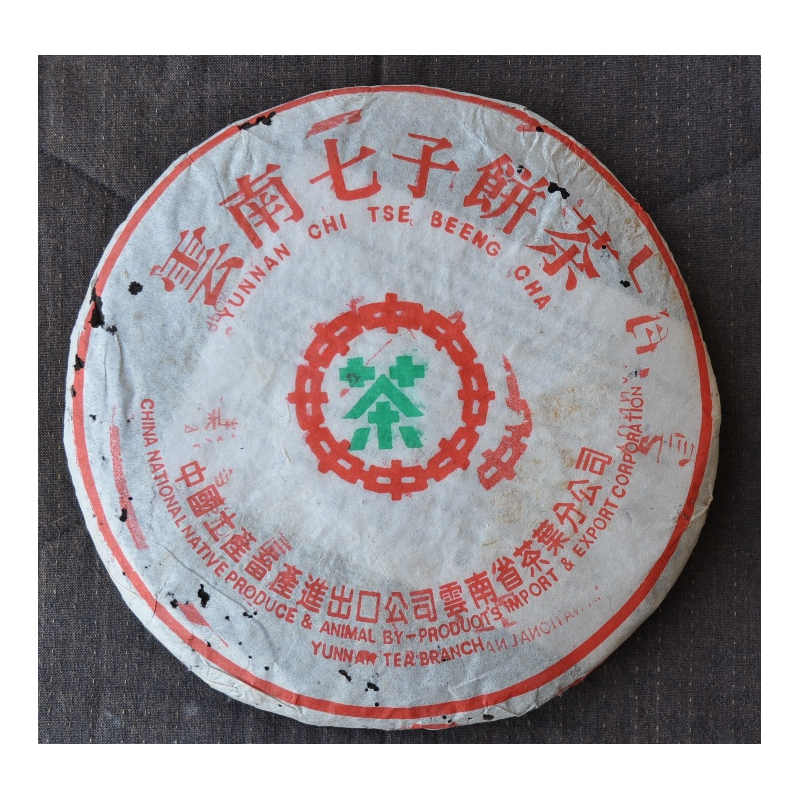 Process: Raw, sun dried, blended and pressed as a cake.

8582 and 7542 cakes are considered to be the descendants of the red mark and the green mark (Hong Yin and Lu Yin) respectively. The puerh of the 50s and 60s became scarce and expensive, so that these cakes from the mid-70s to the 90s became the "must-have" of old puerhs for lovers. They provide a reference for the best quality of this period: the organized monopoly of the CNNP during the first stage of China's ascent. I call it organized, because it was in 1975 that the CNNP's Yunnan Tea Branch began introducing a better classification of its puerh products. They started to have 4 numbers to identify them. The first 2 numbers for the year of invention of this recipe, the third number for the grade of leaf used the most in this cake, and the fourth number to identify which factory produces the puerh. This standardization has its limits, however. The year of production was not indicated on the packaging. This is where it is difficult to tell the age of these cakes. Some people rely on the analysis of packaging, neifei and neipiao to determine the age and authenticity of the cake. The problem with this analysis is that the packaging was printed manually. This caused differences in the color and sharpness of the print in the same batch. In addition, paper is cheap and easy to copy today. What can not be easily imitated is the quality of the leaves, the tea itself. That's why it's better to learn to evaluate tea leaves instead of the wrapper! The pressure on this 8582 is very well done. We would think a record! The color of the leaves is not uniform, but varies according to the type of leaf. The buds have a golden color and the lightest complexion. Large leaves contain less moisture and darken quickly. It should not have a uniform red / brown color: this would indicate a'wodui 'process, ie an artificial humidification process to make the appearance look older. quick. A close-up shows that there are also buds included among the leaves of this 8582. This shows that the "8" in number, it does not mean that this cake is made with leaves that are all of class 8 (= large, mature leaves), but that the majority of these leaves are large and include more stems than a 7542, for example. This is a wonderful cake and very similar to the 1988 Menghai 8582!